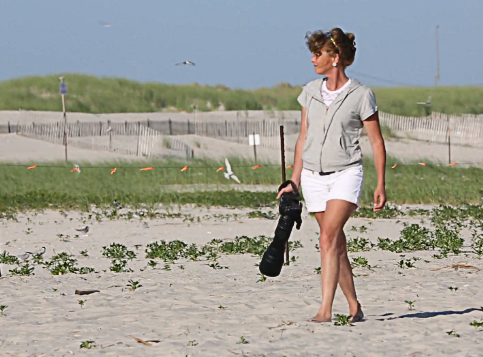 One of her photographs has been syndicated from a reputable greeting card publishing company based in California, named Palm Press. You can view it here: Palm Press.  A compilation of Lisa's work has also appeared in the first launch of Sigma Vision Magazine representing Sigma Corporation of America. You can browse through by clicking this link: Sigma Vision Magazine

Lisa's work is also featured prominently on wildlife rescue websites, reflecting her desire to educate the general public on the plight of endangered wildlife. Through her work, she hopes to be a strong advocate for the preservation of species and dwindling habitat.

“Although I’ve always loved photography, it wasn’t until I graduated to a DSLR and went out to hunt for something to photograph in the wildlife spectrum that I discovered my true passion. My first day out, in the Spring of 2009, I stumbled upon a Piping Plover, who I named "Polly."  Ever since then, each Spring I awaited her return as if no other bird existed.  This is when I discovered the Least Terns, another endangered species of New York State. I was overwhelmed by their beauty and determination to thrive and reproduce -- I could not help myself to want to participate in aiding of their survival.”

Lisa’s work is stunning in its composition and artistry, but what makes her photographs truly unique is the compassion and empathy she brings. Perhaps this is not surprising given her 17 years as a nurse prior to her pursuing photography as a serious endeavor.